It’s no more news that Infinix has started rolling out the Android 7 Nougat update to some of its devices which also includes the Infinix hot 4.

The first beta version of the Infinix hot 4 Nougat update was recently released and as expected, it came with a lot of bugs. Now Infinix has released the 2nd Nougat beta update which fixes some of the bugs and also comes with many new features.

Below are some of the known bugs of Android 7 Nougat

1.Phone takes too long to boot-up after restarting or Turn off like 2mins
2.Still No option in Notification Bar to set device on Sound, Vibrate, Mute
3.Battery Optimization: Battery drain faster than a leaking pocket.
4.Auto Brightness still don’t work if you go outside or at a bright place it still stays low, have to increase manually
5.Now While Calling,  can’t hear both sides properly Mic and Speaker deliver voice really  low even volume is at maximal. 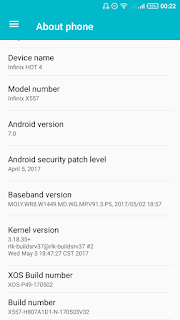 How to Install And Android 7 beta2 on Infinix hot 4 via SD card
For the purpose of the first timer, get a clean SD card and placed the downloaded ROM inside
1. Press your menu key and go to system update
2. Choose update from the local option
3. Choose the version you downloaded to your SDcard and click on install
4. Your device will reboot and start upgrading to Android 7.0 Nougat

If you encounter any boot loops Just clear the system cache by entering the quick boot menu.