According to Report from WABetaInfo, the writing team of BravoTechArena gathered that WhatsApp is developing a new dark mode feature for its Android app and has started implementing the new interface in the latest beta version.
From the Beta update for the App released on 26th March contained the first mentions of the feature. A more recent update now includes more information on the dark mode option. 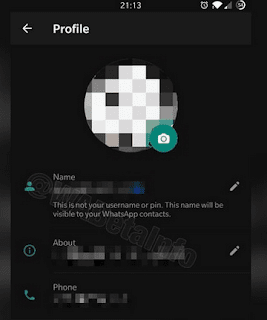 The new Update from WhatsApp Beta shows they are implementing an optional dark mode interface across its settings pages, well as Status Bar and Profile menus. It is not yet official.
Also there is an optional update to see the number of times your messages has been forwarded as reported in the last update.

See Also: 9mobile Rolls Out Free Chatting On WhatsApp To All Their Customers

About The WhatsApp Forwarded Info

After being spotted as ‘disabled by default‘ in the last beta update., the WhatsApp beta 2.19.87 update has finally enabled the ‘Message forward info’ feature. All users who received the beta update. can now see the number of times a message has been forwarded.
However, this information is available only when. you are the sender of a message that has been. forwarded to multiple users. This can be checked by long-pressing the forwarded message and tapping .on the information icon (‘i‘ in a circle) at the top.
In conclusion, if you have received a forwarded message that has been sent to multiple users., you cannot check the number of times it has been forwarded. Additionally, the ‘frequently forwarded’ tag which was spotted recently for messages .that have been forwarded more than four times is nowhere to be seen in the latest beta build.

Blow 2GB for just N700 with the new 9mobile SocialPak