As SAMSUNG readies up to release the new Galaxy Note 9 in the coming months, there are some very good deals on the Galaxy Note 8. 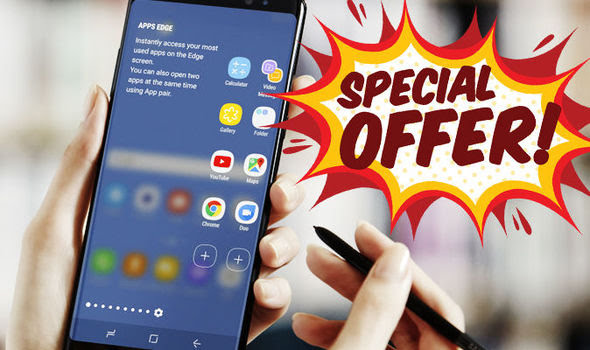 Galaxy Note fans now have an amazing smartphone to look forward to with the impending launch of the new Note 9.

The phablet is looked forward to be released by Samsung in early August and is rumoured to come with improved power storage, a smoother screen and better camera.

So, with a new Note 9 on its way, it seems now could be a very good time to buy last year’s Galaxy Note 8.

This device was one of the best smartphones of 2017 – although its £869 starting price which is quite expensive.

As luck have it, few deals are going on now on the market which means you can get the Note 8 at a much more reasonable cost.

There’s also another reduction from Carphone Warehouse who are selling the device for £799 – saving £40.

If it’s a contract you are after there are also some decent deals with fonehouse currently selling the Note 8 for just £38 per month.

That contract includes 4GB data plus unlimited calls and texts.

There’s no question that the Note 8 is an amazing phone with a top review of it saying: “This is one of the best phones Samsung has ever created.

“It’s fast, powerful and has one of the greatest screens we’ve ever seen on a smartphone.

“Samsung’s clever rimless design also means that, despite its giant 6.3-inch screen, the overall dimensions aren’t that much larger than the iPhone 7 Plus.

“Along with its design and astonishing screen the camera is incredible and could easily take the crown of the best smartphone snapper of 2017.”

So what’s to come next from Samsung on the new Note 9?

The Samsung Galaxy Note 9 is expected to feature a 6.3-inch Super AMOLED QHD+ screen with 18:5:9 ratio which should offer HDR level quality.

It might also come with a dual lens rear camera with variable aperture like that found on the Galaxy S9+ which should mean excellent low light photography.

There may also be an enhanced front-facing camera system which allows for greater accuracy and speed for facial recognition through Samsung’s iris spotting tech.

The Note 9 is expected to be powered by a Qualcomm Snapdragon 845 CPU or Exynos chip, depending on location.

In both cases there should be at least 6GB of RAM for lots of speed.

A recently leaked image also appears to show a tweaked design with new placement for the fingerprint scanner and a dedicated camera button on the side of the device.

It was also thought that Samsung would squeeze a much bigger 3,850 mAh battery inside the Note 9’s glass and metal shell but that may not now be the case.

A new leak from Ice Universe claims that Samsung is taking its battery tech a step further by placing a giant 4,000mAh power pack inside.

If true, it will make the Note 9 one of the most powerful devices on the market and could also help owners get much more life out of a single charge.

What do you have to say about this smartphone?